The latest issue of Electric Spec is available! W00t! Huzzah! 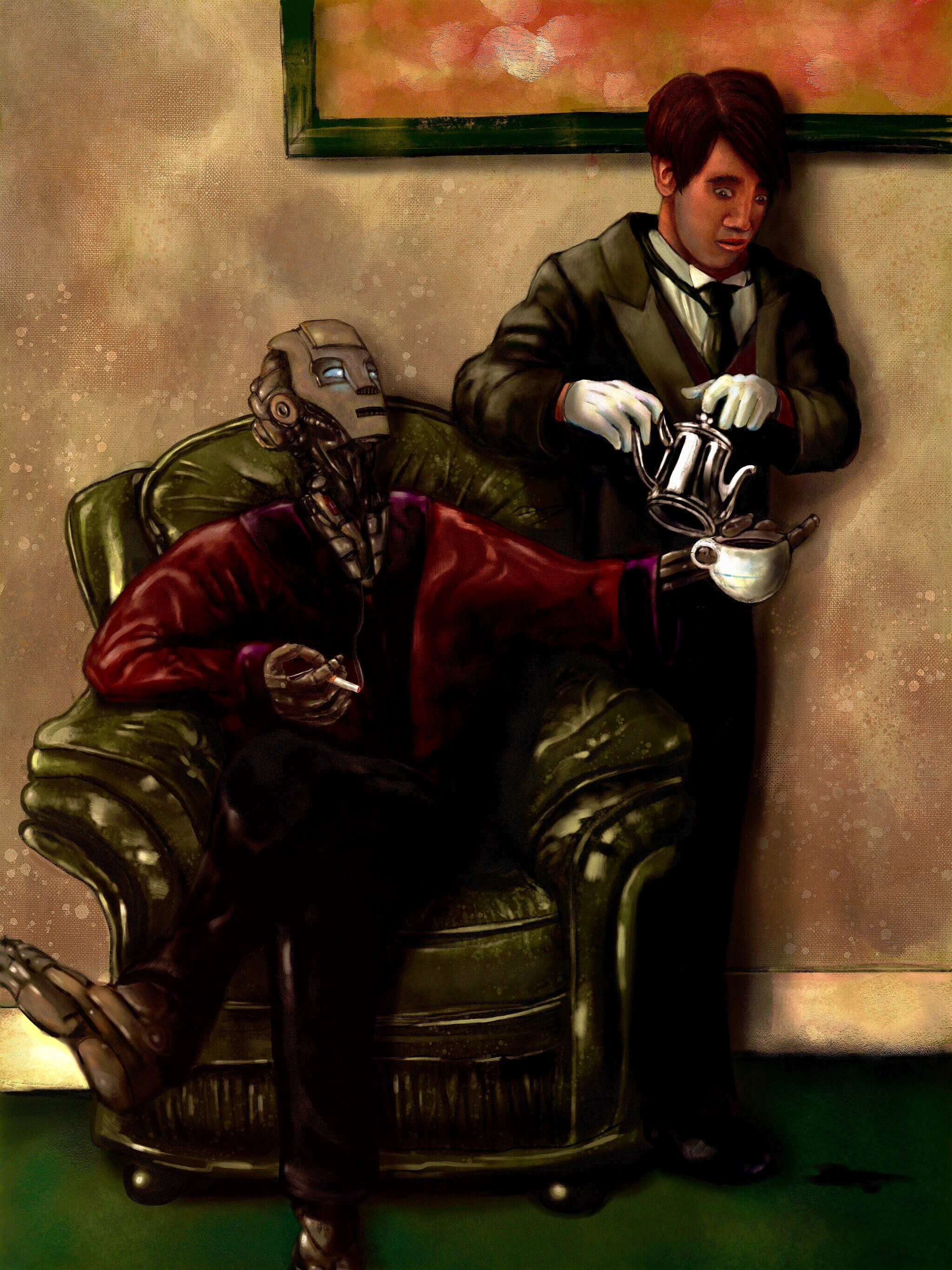 Most of all, thank you readers! We wouldn't exist without you!

Posted by lesleylsmith at 9:15 AM No comments:

We're pleased to post comments by Dale Glaser on his upcoming scintillating story "Red Screamy."
My father was my gateway to genre fiction in a lot of ways. I read the Tom Swift novels he had collected in his childhood, listened to his vinyl double album copy of the Star Wars soundtrack on the family turntable (back before cable TV and VCRs made watching the movie itself at home a possibility), and generally followed him down various rabbit holes from a young age. Eventually I went my own way and discovered my own particular fandoms. My father was never the horror fan I grew up to become, nor was he ever taken in by the mythological or dystopian overtones of heavy metal. Still, there's no denying that he got me started on the path, from way back when to where I am now.

Somewhere in the middle, though, there was the point in time where I was outgrowing child-friendly versions of science fiction and fantasy and moving into more mature material, still about aliens and magic and so forth but with explorations of moral gray areas and other existential ambiguities, as well. I was a precocious kid and a voracious reader, so this transition came young enough to be somewhat problematic. My father never forbade me to follow my own interests, but I do remember him having conversations with me about whether or not I really understood what an anti-hero was and that they were not exemplary role models. I promised him that I knew the difference, which may have been motivated as much by wanting to tell him what he wanted to hear as objective truth, and I like to think that time bore out the promise, but I leave it to others to judge how well-adjusted (or not) I truly turned out to be.

Over the years I often found myself returning to these ideas, the things we learn from our parents and the interests we share in common with them, and how many of those things are or aren't considered acceptable and appropriate. Once I finally had children of my own, I gained more insight into how it all looked from the other side. A staggering amount of insight, really, as anyone who has undergone the fundamental life shift of having children knows. Picking and choosing which parental interests to investigate further as a child is a luxury; determining what to offer and what to withhold from a child as a parent is a responsibility, wrapped up in the ongoing efforts of trying to mold and shape a halfway decent human being.

Somewhere in the never-ending process of sorting through all of the above, my story "Red Screamy" started to take shape. As with many story seeds, it grew from taking something I believe in and extending it far beyond the usual rational limits. I encourage my children to be unique and independent and free-thinking, and if that means outsiders might perceive them as a little strange, so be it. But what if that strangeness became its own kind of gateway to forces beyond a child's understanding, or even beyond my own? That struck me as a tale worth telling.

Another compelling wrinkle occurred to me as the story played out in my head: what if two parents fundamentally disagreed on where to draw the line between fair game and out of bounds? I'm very lucky, and eternally grateful, to have a partner in real life who shares both a good proportion of my interests and my philosophical outlook, and we've never experienced major conflict and strife over what our children are exposed to or encouraged toward. But in the world I was inventing, I could see how it would be easy for opposites to attract and then clash over the young, impressionable spirit they are both responsible for.

Posted by lesleylsmith at 7:59 AM No comments:

We're coming down to the wire now. The marvelous May 31, 2016 issue of Electric Spec is only one week away! We've been working feverishly behind the scenes to get your free speculative fiction out to you. As promised, here are some more previews of coming attractions. We will be featuring two more spectacular stories:
"One Slow Trigger Day" by D.A. D'Amico and Dean D'Amico is an unusual tale of old-West gun slingers and their challenges. Or it is? :)
"Red Screamy" by Dale W. Glaser is a disquieting horrific fantasy which isn't afraid to take some risks.
We'll also feature some amazing art and possibly some other surprises.

And now without further ado, some words from Frances Gow author of "The Watchers."

I wrote The Watchers when I starting researching steampunk fiction as part of my MA Creative Writing. The aim was to write a piece of fiction using the city as a backdrop, evoking a strong sense of place. Victorian London has always been a classic backdrop for steampunk and because I know the city well, I felt able to feed on its nostalgia. I chose Paris because it fascinates me and the similarities and differences between the two cities was interesting to explore.

So with the background suitably steampunk, I managed to get in a bit of steam-powered tech alongside the retro-futuristic inventions. The protagonist’s story itself attempts to subvert the norms of the historical times, simply by the fact she is female attempting to enter a male dominated profession. And of course, there have to be aliens involved somewhere. The story itself might not live up to the classic steampunk definition, but it is my version and I think what emerged was something quite unique.

As promised, here are some comments from Graham Brand, author of a story we are very proud to present: "Cutting It Fine."


When I checked my notes for "Cutting It Fine" I was surprised to find that it was the first science fiction story that I wrote, where by 'wrote’ I mean that I completed a first draft. However, it had such a long revision period that other stories came and went before this one reached the final version that you can read here.

I’ve always had a fascination for the people in the background of space-faring tales: the janitors, the barmen, the clean-up crews. One of my favourite episodes of Babylon 5 was "A View from the Gallery," which focusses on two maintenance workers, and let’s us see the space opera action of an attack on the station through their eyes.

I decided to get serious about writing back in 2011, and "Cutting It Fine" started life as a warm-up exercise. I plucked a topic from the air (a barber on a space station) and sat down and wrote without any preparation. That file—called 'Barber Musings’—became the first scene of the story.

My barber character then languished in his orbital salon for over a year, until I fleshed out the story to its first draft of 6,900 words in October 2012, with a revision trimming it down to 5,900 words in February 2013.

My day job as an IT project manager intervened again. Throughout all this I’d been running projects first in Seoul and then in Sydney, and I didn’t get back to the story for another year. In the spring of 2014 five of us from the MobileRead forums decided to put an anthology together, and "Cutting It Fine" was one of my contributions. We acted as beta readers for each other, and their helpful criticism saw the story revised, and cut still further to 5,350 words.

We didn’t get enough material for the anthology, sadly, and the process eventually stalled. A year later, I ran the story past the eyes of a good friend—the editor of a science journal—who found yet more fat to cut, and I arrived at the final version of about 5,000 words that appears here.

One more thing.
Although I’ve had other full-length science fiction stories accepted in the meantime, they’ve yet to appear. So my first science fiction short story has also turned out to be the first that I’ve had published. So, it’s a big thank you from me to the team at Electric Spec.

I hope you enjoy the story.

This is our official first preview of coming attractions for the marvelous May 31, 2016 issue of Electric Spec. As I said before we had some really lovely stories to chose from. Thus, not surprisingly, we ended up with some truly fabulous fiction. We have two more author stories I hope to tell you about soon.

In addition, in Editor's Corner Nikki Baird will share a wonderful science fiction tale, "Runaway," in which a young girl isn't who she seems and an old man comes to terms with his past.

And, in the meantime, check back here for more previews!

We're putting together a great new issue of Electric Spec for May 31, 2016. One of our featured stories will be the fascinating SF tale "Mother" by Irene Punti. We asked Irene to say a few words about her story:


As the granddaughter of a twin sister, I have always been fascinated by the ways in which two people with the same genetic makeup and upbringing will seem almost identical in their character and then suddenly reveal themselves to be extremely different. This got me thinking about how it would feel to be treated like a copy rather than as an individual, and that’s how I started writing my short story “Mother”.

While I was writing the story I would walk home from work and I would see nests of processionary caterpillar on the pine trees (a very common pest in the south of Europe). They seemed to be the perfect example of losing your individuality: moving in a single file of caterpillars that look exactly like you, following the exact same path as the caterpillar before you. So I decided to incorporate them into the story. Plus I have always been slightly terrified of processionary caterpillars and it seemed only right that for once they would do something good for me.

Posted by lesleylsmith at 6:01 AM No comments:

pulling back the curtain

The Electric Spec Editors recently had the production meeting for the marvelous May 2016 issue. Choosing amongst the lovely stories in hold-for-voting is always difficult. As I think I mentioned, we had an unusually large number of good stories in hold-for-voting. Thus, it was especially tough this time. :( Many of the stories we passed on were strongly liked by one or more editors. Take heart if you were in hold-for-voting: your story was publishable.
If you're interested in more subjective specifics regarding the meeting: the weather strongly resembled a blizzard when we met. (Yikes!)

We're in the process of emailing folks with our decisions. Yays also get a contract. Please send it back ASAP so we can start editing. Once the editor and the author agree on the story version, files still have to go to our copy-editor. Then, after we get files back from her we have to create the webpages. Yes, it's kind of an elaborate process. We also post author bios--so send those along, if relevant.

Other behind the scenes tasks include picking cover art, writing the Letter from the Editor, putting together the Editor's Corner entry. And, of course, we have to pay everyone! Please send along your paypal info. :)

We've also been encouraging authors to send along a blog entry for right here. Please consider this if you are one of our authors. I believe blog hits are around 520,000 at this point. Keep in mind that's hits accumulated over a decade. :)