Notes from the Slush Pile

The Electric Spec editors have posted before about the importance of the first page--even the first paragraph--of a story. The reality is that we have lots of submissions to go through and if we're not impressed with the beginning, we may never get to the end. I wish I had the formula for the perfect story opening, but I don't. However, here are three things I've seen in the first paragraph that have made me want to look at the next story in the pile:

1) Passive voice--especially multiple sentences in a row of passive voice.
2) Lack of a clear protagonist. This usually means there's a long narrative that reads more like a newspaper article than a story. Also, this can be when multiple characters are introduced but I don't know which one the story is about.
3) Generalized descriptions. For example, "The short-haired man stood in the room. Across from him, the woman sitting in the chair smiled." I don't get a picture in my head from these sentences. I don't even know where or when the story takes place. Give me some details. Maybe something like this: "As usual, Alfred, the raisin-faced weirdo from accounting, hovered next to the coffeemaker in the break room. Jane slouched in the hard plastic chair across from him and couldn't help but smile. Tonight, Alfred would die a slow, painful death."

There was an interesting article posted on flavorwire at the end of last week: The Greatest Female Sci-Fi/Fantasy Authors of All Time. It was in honor of the late Octavia Butler's birthday. Here's the list: These authors are amazing. :) What do you think?

I must admit I do have a problem with the "greatest female" label. I'd say most of these authors are among the "greatest" authors period, certainly in the SF/F field.

Generally the "of all time" label is also a bit problematic. Authors can be amazing trail-blazers or ground-breakers for their time, but have their work not stand up years or decades later. (Not that I'm saying this is the case for these authors.) Should we judge authors in their time or for all time?
Tricky.

What do you think? Who are the greatest SF/F authors?

Posted by lesleylsmith at 6:00 AM 5 comments: 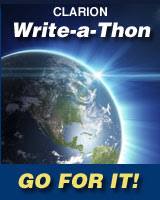 This sounds interesting if you're wanting to light a fire under your writing seat.

notes from the slush pile

We've started going through the slush pile for our next fabulous issue of Electric Spec. (Thanks for your submissions!) I do have some advice for aspiring Electric Spec authors. Savvy blog readers will realize I've said some of this before. That's all I can think of for the moment. What do you think?
Posted by lesleylsmith at 6:00 AM 2 comments:

As most of everyone has heard by now, author Ray Bradbury passed away last night in L.A. This is a significant loss to world culture. Of course, some of his most famous works include The Martian Chronicles, and Fahrenheit 451. I think Fahrenheit 451 is one of the most prophetic novels ever written. It's also the most scientific. Bradbury himself said Fahrenheit 451 was his only true science-fiction work; the others were fantasies despite their settings (such as Mars!). There's no question Bradbury liked to tell stories, but also like to make readers think.

As Clifton Fadiman says in one edition of The Martian Chronicles Prefatory Note: "Mr. Bradbury has caught hold of a simple, obvious but overwhelmingly important moral idea... That idea--highlighted as every passing month produces a new terrifying lunacy: sputniks,super-sputniks, projected assaults on the moon, projected manned satellites--is that we are in the grip of a psychosis, a technology-mania, the final consequence of which can only be universal murder and quite conceivably the destruction of our planet." Bradbury's paradigm was very different from those of his science 'fictioneer' peers. Since humanity has not heeded his warnings, let's hope his dire prophesies do not come to pass.

There's a fascinating interview about Bradbury posted at The Paris Review: Ray Bradbury, The Art of Fiction No. 203. Check it out!

I hope you've already checked out the awesome new issue of Electric Spec. In case there was something you missed, here's a run-down of its excellent-ness. (Yes, editors are allowed to make up words.)

What's the key to kicking off a great summer? Great speculative fiction stories! And we just happen to have several you are sure to enjoy. Returning Electric Spec author A.L. Sirois brings us a startling look at the future of musical entertainment in "Itinerate Pandemonium." Those who love high fantasy will flock to "They Who Ride Griffons" by K.R. Hager. Also in the fantasy department, we bring you Larry Hodges' "In the Belly of the Beast," which presents a whole new take on dragon hunting. If you're looking for a note of tragedy with your sci-fi, read "Time Debt" by D. Thomas Minton. And, just in time for summer, we have "Deep Deep" by Karen Munro, a summer camp story with a side of slipstream. If any of you are planning a trip to Vegas, you may want to read the cautionary tale included in this month's Editor's Corner "My Kingdom for a Gislestorch". As if all this fiction were not enough to get you going, this issue features an exiting interview with first-class science fiction author Warren Hammond, and our film critic explains how the horror film A Cabin in the Woods relates to world politics.

Thank you very much to all our authors and columnists, our tech support folks, our slush reader and everyone else who helped put this issue together. We appreciate you!

And "Thank You" readers! Without you, we wouldn't exist!

Posted by lesleylsmith at 9:13 AM No comments: