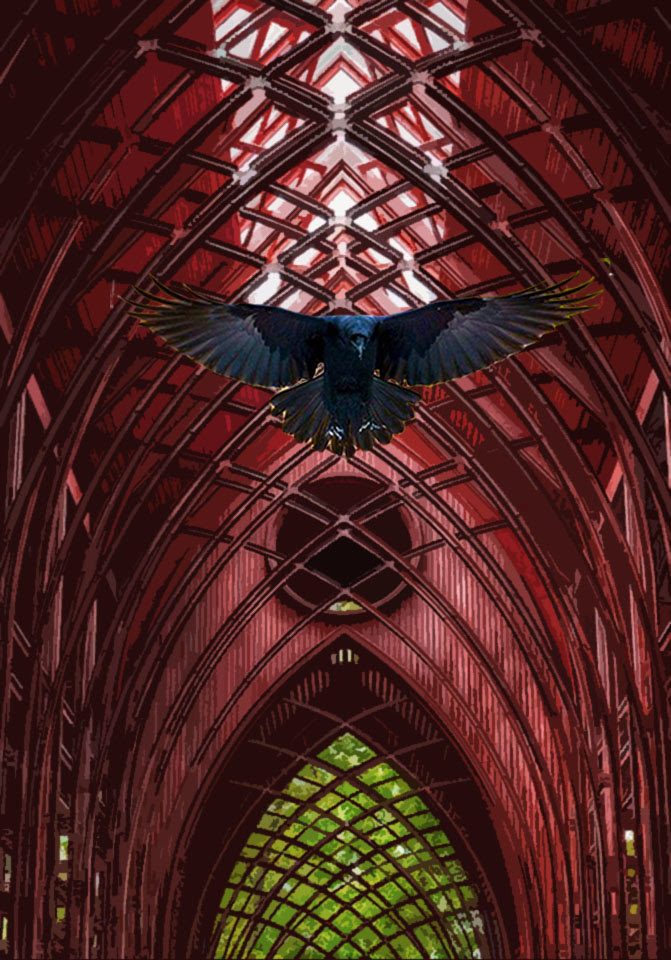 Thank you everyone who contributed including our authors, our cover artist, and the editorial and technical staff.

We're excited about the notable November 30, 2017 issue of Electric Spec!

One of our excellent featured stories is Clara. We're pleased to feature some remarks by its author Adriana K. Weinert:

When I was a child, there was a period when I couldn’t sleep with the light out. Each evening, I would direct my mom to leave the desktop lamp on and pull a chair in front of it to shield me from its direct glare. Similar to Clara in my story of the same name, we all had monsters, imaginary or not, to struggle with as kids, and we all have scars, seen or invisible, to bear witness to battles won or lost.

Demons and monsters in the wardrobe are not only childhood afflictions though. As we grow, the wardrobe merely becomes less tangible and the monsters harder to call out. Insecurities, heartbreaks, and grudges reside in closets in our minds waiting to peek out. But I’ve found that once I resolve to crack the wardrobe door open and shine some light on what lies within, the monster deflates and is far easier to manage. The hardest part is to find courage to face what must be faced, as Clara too finds out.

Eventually, one night, I peeked under my bed finding nothing but dust and forgot to tell my mom to leave the light on. I’ve been sleeping in the dark ever since—through all the subsequent battles.

Thanks, Adriana! Very interesting!
Be sure to check out this story and all the others on November 30!

We're excited about the notable November 30, 2017 issue of Electric Spec!

One of our excellent featured stories is The Fish Kite. We're pleased to feature some remarks by its author Mary E. Lowd:

When I was ten, my grandmother died from early onset Alzheimer's. At the time, we didn't know whether her Alzheimer's was of the genetic variety that would have passed down to my father, sister, and me. We've since learned that it was not. But that question cast a big shadow over a ten-year-old. I wondered what it would be like to lose my memories. I worried that was how I would eventually die. In my ten-year-old way, I found a certain kind of peace with it; a way to live under that shadow. I had to, because it wasn't lifted until nearly fifteen years later. By that time, I had a daughter of my own, and I was seriously pursuing a career (as much as that's possible) writing fiction. Perhaps unsurprisingly, a lot of my fiction dabbled with questions of memory -- what it meant, and what it meant to lose it.

The first story I ever sold, "Forget Me Not," was about a man with an addiction to memory drugs -- Leland was a character with an artificial quirk inspired by my father's own perfectly normal forgetfulness. My mother has always had an excellent memory; my father not so much, and his forgetfulness has often helped him to remember his past in ways that are more comfortable than how they actually happened. I pushed that natural dichotomy to the extreme and provided a science-fictional explanation for it. A few years later, I was shocked and delighted to learn that the mechanism I'd described for targeted memory loss had actually been backed up by real science. Sometimes when science-fiction writers stab in the dark, we can still get it right.

Anyway, one of the strongest images from that first story, "Forget Me Not," involved a fish kite that Leland had made as a child. His fish kite was inspired by my own collection of My Little Ponies. I loved those ponies and treasured them -- until I was in high school and wanted some money. Somehow though, as an adult, I could always remember treasuring them, but I had a hard time remembering I'd sold them. Hours of happy playtime figured much large in my mental landscape than a few minutes spent handing a box over for a fistful of cash. Those missing ponies haunted me like Leland's fish kite.

Fast forward another decade, and discover the wonders of eBay. As my daughter got older, when I wanted to play ponies with her, my husband ordered us old ponies -- just like the ones I'd sold so long ago -- from eBay. Now, I have a new collection of ponies, similar enough to the ones I sold that I don't go looking for them any more. I know where my ponies are -- right on the shelf where I left them. My daughter and I can play ponies together any time she wants.

I was thinking about how I'd healed my own memory wound by replacing the ponies, and I decided that it was time to revisit Leland's story -- maybe give my character a chance to heal of his own.

(For anyone interested in reading "Forget Me Not," it's available online here: http://deepskyanchor.com/forget-me-not/ It's part of an entire collection of my short stories focused on questions of memory, called The Opposite of Memory.)

Thanks, Mary! Very interesting!
Be sure to check out this story and all the others on November 30!

We had a successful production meeting last week. Most folks in hold-for-voting) should have heard back from us by now (there may be a few stragglers...sorry!). We're excited about the notable November 30, 2017 issue of Electric Spec!

One of our excellent featured stories is The Chain Outside of Time. We're pleased to feature some remarks by its author Aaron Proctor:

Any good story should be woven from some big idea. Once storytellers lose that idea, the story seems to lose it’s reason for being told. We all know that great show that just went off the rails at some point. Well, I believe that happens when the writers lose their authentic sense of of the idea upon which the story grows.

While writing “The Chain Outside of Time," I drew upon my past struggles with addiction. The fatalism. The isolation. But that doesn’t mean that the story is specifically “about” addiction because I’ve seen that fatalism and isolation reflected in the faces of many of you out there. Maybe you’re depressed. Maybe you’re anxious. Maybe you just feel out-of-step. And maybe this is all just grandiose writer BS; but—for better or worse--it helped me write the darn thing.

And I really hope you enjoy it and get something out of it.

Thanks, Aaron! Very interesting!
Be sure to check out this story and all the others on November 30!

Short Fiction as a Marketing Technique

If you are reading this, you are probably a writer. We writers are living in a wonderful new age of possibilities. From Indie- and self-publishing, to bundles and anthologies, ezines, crowd-sourcing, Patreon, and everything else, there have never been more opportunities for writers. Isn't it awesome?
Unfortunately, it also means there's never been more competition for readers.
Writers need marketing for their work. A difference between publicity and marketing is: publicity is putting your product in front of other peoples' audiences, while marketing is putting your product in front of your audience.

Thus, an excellent way to market your fiction is via short stories. Short fiction can help create your audience. It gives readers a specific taste of what you have to offer. (What other artistic endeavour can do this?) Short stories are thus even better than ads, and bonus: editors pay you rather than the other way around. Short fiction enables you to get your name out there. Depending on the short story venue, you can get your name and product out in front of people you might not reach otherwise--but they're still readers who are interested in your kind of stuff.

In the case of Electric Spec we post an author bio and often an author blog post, as well as keeping your story itself posted forever (or until you ask for it back). Can you say: link s to your website and social media? And, yes, links are good things.

And oh yeah, there are other benefits to short fiction. It can really hone your writing skills. If you can writ e an excellent short story, let's face it, you can do almost anything. :)
Bottom line: short fiction is an excellent marketing tool!

What's happening with Electric Spec? Why, I'm glad you asked. :)
We finished the slush pile for the notable November 30 2017 issue. All authors should have heard from us with either a 'no thanks' or a 'we're going to hold this for voting.' If you didn't hear from us by now, something probably went awry. Please resubmit your story.
Next week I'll blog about the production meeting and start bragging about the new issue! Stay tuned!