Huzzah! The awesome August 2021 issue of Electric Spec is live!

Posted by lesleylsmith at 11:00 AM No comments:

The awesome August 2021 issue of Electric Spec is live! Woo hoo!
One of the stories we are excited to feature is "A Thousand Ways" by Beth McCabe. Here's what the author has to tell us about the story:


I'd like to give a nod to the late, great Robert Heinlein for the inspiration for my portrayal of Riley, the protagonist of my story "A Thousand Ways."

When I was a kid in the middle of the last century, my mom often dropped me off at the town library after school. At the time I assumed she just wanted me out from underfoot, worried as she always was about performing her household duties up to that era’s oppressive standards.

Later I understood that she was also sharing a gift with me: her love of reading. (She hid her own library books under the toaster cover, as Dad considered her reading for pleasure "wasting time").

During those long afternoons I roamed the dusty stacks, pulling out any volume that looked interesting. With no adult guidance (thank goodness), I didn't know there were rigid sets of girls' books and boys' books. And so I fell across Heinlein's Juvenile Novels--what we would now label as YA.

That was it for me: I knew I was meant to read, and write, speculative literature.

It's true that Robert H. could only envision boys as main characters in his adventures. And at least one of his books was serialized in Boys' Life, a Boy Scout publication, effectively bypassing young female readers. (I like to picture some of those boys' sisters innocently saying, "What magazine?", then following a Heinlein adventure under the covers with a flashlight.) But his books still spoke to my inner girl nerd, an entity that had scant reinforcement in that time and that place.

One of my favorites was Farmer in the Sky. In this book, a family emigrates from a dying earth to the Jovian moon Ganymede, which they have been told is a fertile farm colony. I vividly remember the immediacy and verisimilitude of teen-aged Bill's new environment. In spite of the fact that little was known about this moon--which just gave Heinlein's prodigious imagination more leeway--I was right there on Ganymede with Bill.

When I set out to write "A Thousand Ways," Riley was very clear with me about how to tell her story. I had to make people not just see, but feel what a first-generation Martian kid would feel. How the challenges of adolescence--sibling rivalry, an unrequited crush, an existential threat to her community--would play out just as it would for an Earth kid. But, although one-third g, dust storms, and a cramped underground habitat would be an alien environment for us, to Riley, it's simply home.

No matter what planetary body it's on, there's no place like it.

My thanks to the Electric Spec editorial team for giving Riley her voice. It's great to join this talented group of authors and editors.

Thank you, Beth!
Check out "A Thousand Ways" and the rest of the brand new stories!
Posted by lesleylsmith at 5:00 AM 1 comment:

In the awesome August 2021 issue of Electric Spec we're pleased to feature Jonathan Sherwood's story "Shaytandokht." Here's what he had to say about it:

I would like to preface this post by saying that my story, "Shaytandokht," which is set in Afghanistan, was written and accepted before the recent terrible events unfolding in that part of the world. It is not a commentary on the current crisis, and I don't pretend to have any insight into it. It's merely a coincidence.

"Shaytandokht" is one of the most difficult stories I've ever written, but it's also one of my favorites.

The story is set in the frozen desert of modern Afghanistan, and the title refers to the Farsi name of a woman named Shaytandokht (pronounced "set-on-doh-hut"), who a few locals say is the daughter of the devil.

The story consists almost entirely of three men walking across the desert, just talking. But what made the piece so difficult to write is that two of the three men don't speak the same language and rely on the third man to translate between them. And none of them are named, so ensuring the reader knows who is talking means leaning heavily on each man's individual mannerisms.

Doing that became complicated by the fact that I wanted the piece to have the feel of an allegory, so I used very sparse and simplistic phrasing throughout.

I outline my stories in great detail before I write, so the first draft of "Shaytandokht" took only a few hours, but the revision took days because so much depended on the individual word choices. The rhythm of the language had to reflect the stilted nature of the three men's somewhat adversarial relationships, so I was constantly replacing words that either felt too expressive for the trio or (for lack of a better word) civil.

One of the trickiest aspects was illustrating the men's individual personalities. For instance, when the non-English-speaking man relayed something, he would display certain mannerisms relating to what he said. But the guide, who would normally just translate the first man's words into English, would sometimes have his own reactions to the man's words, so every aspect of the ongoing conversation would be colored by the guide's own word choices. It became extremely difficult to create that constant juxtaposition of the original words and the speaker's mannerisms, and the guide's translation and his reactionary mannerisms. Hopefully, the reader will never notice any of that, but trying to make it transparent took more time than the entire initial draft took to write.

Probably because of all the effort to hide the complexity, "Shaytandokht" is one of my densest pieces. At 2,100 words, it's quite short, but I think it packs more punch per word than anything else I've written, and even though we barely get to know the characters in that short time, I secretly like them all.

I do hope you enjoy "Shaytandokht" as much as I enjoyed writing it.

Thanks, Jonathan! Very interesting!
Be sure to check out "Shaytandokht" and the rest of the stories on August 31!
Posted by lesleylsmith at 5:00 AM No comments:

We're exited to feature "Lady of the Sword" by Brian Malachy Quinn for the awesome August 2021 issue of Electric Spec. Brian tells us about the piece: "Lady of the Sword" is one in a series I did of lady knights. Beautiful women that are also lethal. I tend to do series with a general theme – whatever is causing the neural synapses of my brain to fire. Like when Covid hit in March of 2020, and I did, I think seven lion paintings (some quite large) to avoid watching the mounting body count as we entered the Apocalypse. For my speculative art, I try to put some time and effort into the backgrounds to make them memorable, but I think I bit off more than I could chew with this one as I spent way too much time on the background of this one.
Thanks, Brian! Very interesting!
And without further ado, here's a sneak peek: 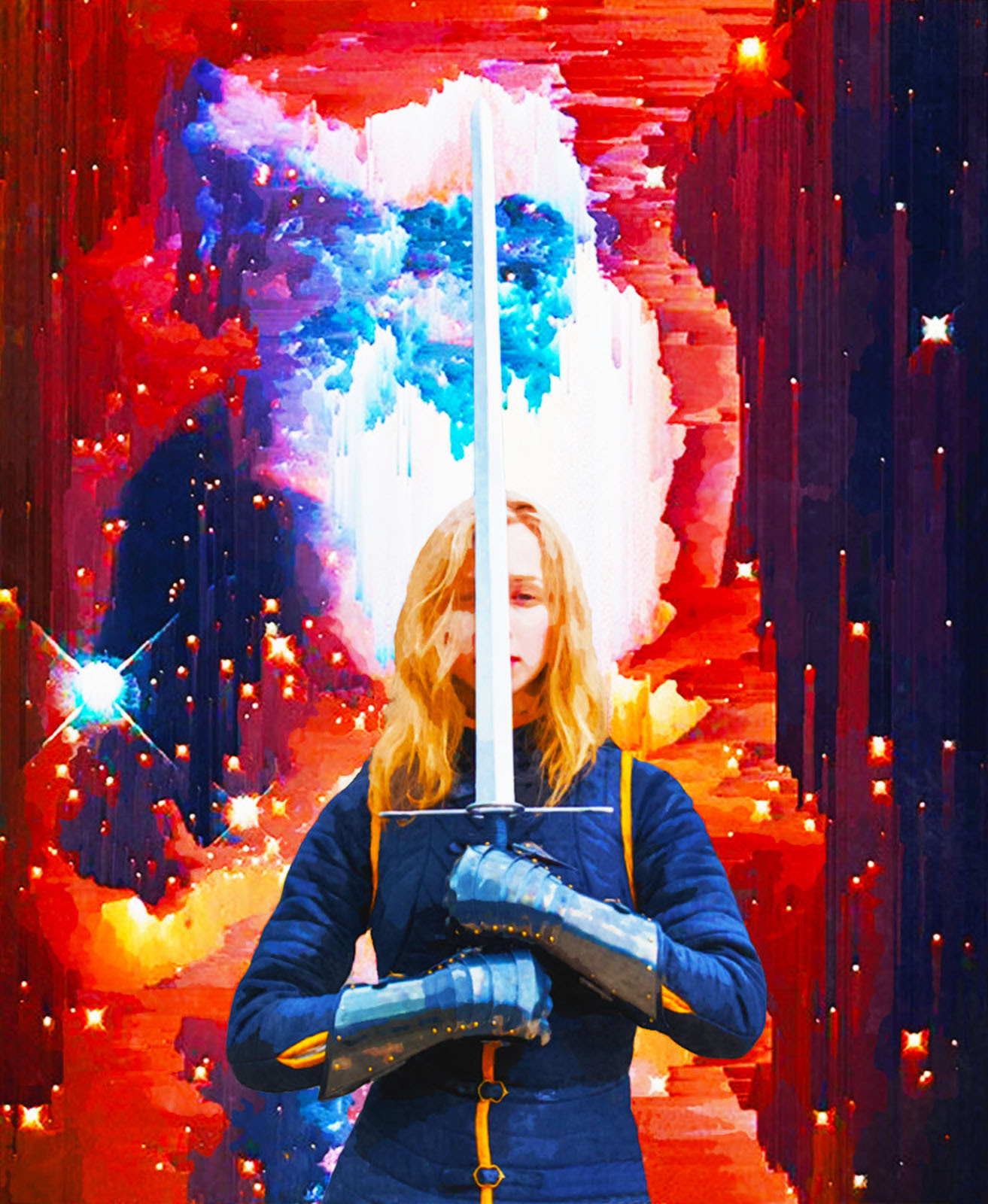 Posted by lesleylsmith at 5:00 AM No comments:

We have a lot of great stories coming up in the awesome August 2021 issue of Electric Spec! One we are excited about is "The Promises of Sisters" by J.C. Pillard.
Here's what J.C. had to tell us about it:


I don’t write about siblings. That probably sounds deeply ironic, coming from the author of a story called “The Promises of Sisters,” but it’s true. Like many fantasy authors, I end up with a lot of orphans and only children. It’s hard to go on magical adventures when your sibling wants to come, too.

I do, however, have two sisters. I’m the oldest of three, and my sisters have profoundly shaped me as a person. They regularly challenge and infuriate me, and they support me even when I can’t support myself. Such is the power of siblings. They also read my writing regularly, although hilariously, they won’t read this story until it comes out (hi Emily and Aly!).

It can be a hard thing, as a writer, to have an idea for a story and have that story take you in a completely different direction. So it was with this tale. While I was trying to walk the land of the dead, my protagonist was trying to get to her sister, and she wouldn’t rest until I’d added that sister into the story. As usual, the writing knew better what it needed than I did myself. The sister stayed, and the story unfurled from there.

When it came time to write the ending, though, I was challenged yet again. I don’t want to give anything away here, but I will simply say that sisterhood works both ways. I’m sure I infuriated my siblings just as much as they did me, and I know they love me as much as I love them. Love is not a straightforward road, and sisters will be pulling each other’s hair one minute and walking the paths of the dead for each other the next. Metaphorically, at very least.

Thanks J.C.! Very interesting!
Posted by lesleylsmith at 5:00 AM No comments:

We had a great Production Meeting for the awesome August 2021 issue of Electric Spec. We did end up meeting virtually which meant all of our feline assistant editors were able to attend. Meow! (What is it about cats and virtual meetings?!)
We had a large number of wonderful stories to choose from. Yay! We had trouble deciding, so ended up picking six stories. Yes, this is unusual!

Thus, all authors have, or will soon, hear from us regarding the disposition of submitted stories. 'Yes' authors should have, or will soon, receive a contract. As soon as we get those back, we start editing stories. Some editors think this is the funnest part of being an editor--helping make stories even better.

Our tech team has already starting creating the issue on the website. We are looking forward to getting blog entries from authors/artists for this very blog.
So, stay tuned for more Electric Spec info right here!

Posted by lesleylsmith at 12:01 PM No comments: